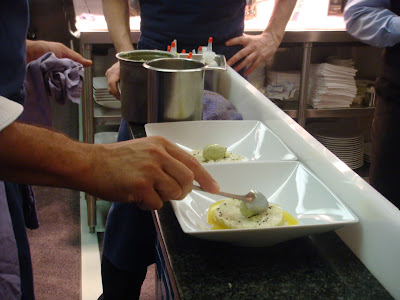 Being a restaurant cook is NOT an easy job. It’s like working in the military except you work with tomatoes and bacon instead of guns and grenades and your life is not at risk every day you’re in the kitchen (or is it?!). The hours are long and you’re on your feet the entire time. Ironically, I’m always terribly hungry at the end of the shift. The earnings aren’t great either, especially in the best restaurants.


Ever since I decided eight years ago that I wanted to cook for a living, I’ve had several people in the industry talk me out of it. They’ve tried to convince me all along that the sacrifices that this job demands dictate a miserable life. I have never met anyone who’s thought otherwise. But I wanted to find out myself. I believed that I really loved to cook and the idea of feeding people happiness appealed to me so much that I felt that my passion would override all the discomfort that came with the job.

In between dealing with the tantrums of a bossy fellow cook and figuring out that the front waiter earns thrice as much as I do while working far fewer hours, I was having yet another bad week and it had only been a month since I started. Moreover, I knew that this was how it was going to be for a really long time. I was ready to give up and leave. Not just quit the job but the profession altogether. Doing that however would make me a quitter, and I seriously doubt if I would be able to live with that. Besides, what would I do?

Durango persisted that I shouldn’t be putting myself through this if I was really unhappy. I know that I need to give it more time. This is my first job after all.
Posted by ChefTZac at 11:04 PM