You Are What You Cook 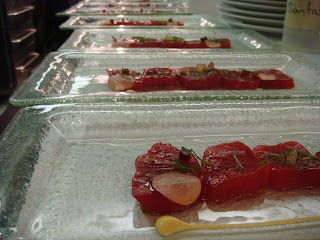 Being a full time cook has changed everything. I couldn’t vouch for other professions but cooking professionally transforms not just food but the cook as well.

I used to be a calm, timid, geeky little kid—the kind you would see on the streets and think, ‘Oh, what a sweet little boy.’ I was a perfectionist, but I was also easily impressed. I was highly tolerant of people and situations. There was no one person I really feared, who could actually control my behavior with his own. I didn't mind the occasional sour grape in the bunch. I was never used to working hours on end or exposed to any significant level of stress. All of that changed after I entered the kitchen.


Multitasking, speed, efficiency, alertness, agility, stress management, spontaneity, and endurance are the names of the game. Master these and the only thing that could hold you back from doing incredibly well would be bad luck.

A definitive attitude change is a must. As selfish as it sounds, you’re always looking out for yourself; like my Sous Chef says, “Trust no one!” Though everyone is ultimately trying to have a good service every night, they’re looking out for themselves too.

To survive in an upscale restaurant kitchen for any significant length of time, one has to adapt. The other cooks, much like you, are overworked and highly underpaid, making them either terminally grumpy or irrationally eccentric. Your boss will not hesitate to scream or insult you for the slightest of errors on your part (including the dots of vinaigrette around the salad on a plate not being perfectly evenly spaced). The kitchen is a hot, intense, and dangerous territory that thrives on organized chaos. The slightest of errors can have traumatic outcomes.

If you can get past all this and still love the daily grind, it is rewarding quite unlike any other profession because as a cook, you create. And not just anything, but meaningful, comforting, hopefully delicious food.
Posted by ChefTZac at 10:39 PM