How I Ended Up at the James Beard Awards 2010

The clock read quarter past six. Work had been crazy the previous week and I was feeling so down that I found myself sitting in a Subway sandwich shop ready to order their nasty five-dollar-footlong, Italian B.M.T no less. We all stoop really low at some point.
Just as I take the first bite, I get a text from a close CIA friend, almost as though the culinary gods sent it personally, reminding me about a $500-a-ticket culinary event that any gastronomically inclined gentile would kill to attend. I definitely couldn't afford it and it was too late to buy tickets anyway. At this point, I thought to myself, I would have to crash the party to get in. No harm trying.


I had 15 minutes to get there. Within the first five minutes, I ran back home and changed into a suit; if this were a movie, I probably would've looked
like Clark Kent switching into Superman, except I didn't have a red cape, neither did I wear my underwear on the outside. Come to think of it, I can't fly either or do I have X-ray vision, though that would be nice.
I jumped into a cab and made it just in time. Thankfully, I had a friend on the inside who came out to get me with an entry badge he borrowed from someone on the inside. You would think there'd be better checking measures at a $500 gala event. He led me through a series of doors and hallways into the main auditorium just as the emcee introduced himself. It was none other than Alton Brown and I was at the James Beard Awards! 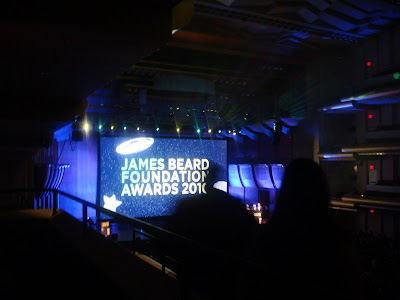 Among the many perks that come with living in New York City are the many events and shows which one can attend that cover practically every realm of man's activity. Art Gallery openings, food shows, science festivals, air races, award ceremonies, group meetings, grunge parties, festivals, you name it. But the James Beard Awards Ceremony is the pinnacle for someone in the restaurant industry, the Oscars of the culinary world. And I was right there in the middle of it all.

The ceremony honoring the finest in the restaurant industry lasted about three hours and had everyone from Thomas Keller to Kevin Zraly give away the awards. Quite inspiring, to say the least.
The main hallway was adorned with over two dozen stalls set up by noted chefs from all over the country serving up their favorite grub. Jonathan Benno was there promoting his upcoming restaurant at the Lincoln Center. As was Jen from Eric Ripert's 10 Arts in Philadelphia. 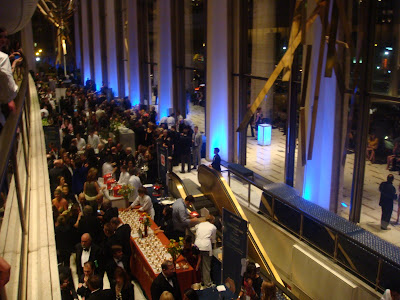 Navigating my way through the crowd, I couldn't help but bump into some great chefs and strike up conversations. Jose Andres wouldn't stop talking about Spain and even offered a job at any of his restaurants. Rick Bayless and I spoke of a common friend I currently work with. Sean Brock of the McCrady's fame who'd won a Beard earlier that night was my friend's former boss. He was drunk and couldn't stop smiling from the joy of having won something so prestigious.
In between trying to get another round of Champagne and looking for Alton Brown, I stumbled upon a man in a suit that vaguely resembled the joker outfit in Batman. Jacques Pepin! I giggled like a little school girl. Okay, enough name dropping. All in all, it was one fabulous evening. I wouldn't trade the experience for anything.
Posted by ChefTZac at 2:53 AM