My Quest for the 'Best Burger'

Put in simple terms, a hamburger is a hot sandwich of cooked ground beef patty placed inside a bread roll. It could have various fillings including, but not limited to, lettuce, tomato, onions, pickle, mustard, ketchup, cheese, and bacon. But that's put in simple terms. A really good burger would have a soft but toasted bun, a juicy and well seasoned beef patty, and just the right amount of condiments and toppings that ultimately provides the right combination of flavors in every bite. It is just a really clever and delicious sandwich.
In my three short years in New York, I've spent many a day looking for the 'best burger.' Searching for great places to eat in New York during my time there was more than just a past time hobby for me. It was more of a sport. I was determined to scope out the best joints and find exemplary food that I felt couldn't be found anywhere else. I even wrote about it in my blog, Diving into NYC.
Let's face it. With the internet being spammed with food bloggers from all over, it's not hard to find great food in the city. I could tell you without blinking an eyelid that the best doughnuts are at Doughnut Plant and the best seafood at Le Bernardin. You would think that there would be a consensus as to where you could find the best burger in New York City as well. But no!

There are as many 'best burger' joints in Manhattan as there are spikes on the Statue of Liberty's crown. The Corner Bistro, P.J. Clarke's, Burger Joint, and Shake Shack all put out pretty decent interpretations. Having tried them all, I couldn't really decide which one to actually place my vote on. Some had really juicy patties while others had more flavorful ones. The sesame bun was perfect in some but the meat wasn't as great perhaps.
We all know how bad a burger can be. Just step onto the streets and look for the nearest McDonald's. The Big Mac is just a poor excuse for a burger. The bun is a dense, dry assemblage, and the patty...ugh that flavorless tough flat disc of a patty! The only thing it has going for it is that it is easy to handle.


On the other spectrum, how good can a burger really get? Ultimately, it is just ground meat in a bun, isn't it?! I concluded that I'd probably never find a hamburger that would bowl me over.
Not until June of 2010, just a month before I left the USA for India, when I came across rumors about a certain Black Label Burger at the Minetta Tavern on MacDougal Street in Greenwich Village. I did a little more research and found out that they used a blend of dry-aged beef short rib, brisket, and skirt steak to make their own ground meat for the burger. I was more curious than excited to see how this tasted.


After all, dry aging is an ancient process of hanging meat at near freezing temperatures for weeks which allows the meat to dry out and causes the innate enzymes to react thereby intensifying the beef flavor and tenderizing the meat as well. The longer the beef is aged, the more flavorful and tender it gets but it is also tricky. There is a fine line between perfectly aged beef and spoilt meat. Minetta Tavern apparently aged its beef for six to seven weeks. Intense! 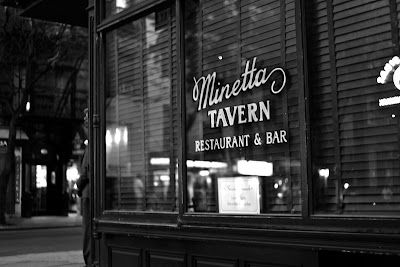 While making my way there, I wondered how I could possibly have missed this landmark of a place. Frank Bruni of The New York Times gave Minetta Tavern three stars in his review of the place; a title held by just over 40 restaurants out of a whopping 20,000 in the city.

In fact, MacDougal Street was definitely my most frequented strip of land on the island. My favorite spot for a quick Indian bite, The Kati Roll Company along with the highly acclaimed Mamoun's Falafel and the 24 hour Esperanto Cafe  are just an egg's throw away on this same street. Even the famous Cafe Wha is just 15 feet away across the street right next to Minetta.


As I walked up to Minetta Tavern, I felt this strange rush inside me--almost like the feeling I would get while singing before a crowd with my band Irksome Bliss in Manipal. I had walked past this restaurant easily over a hundred times without stepping in even once. 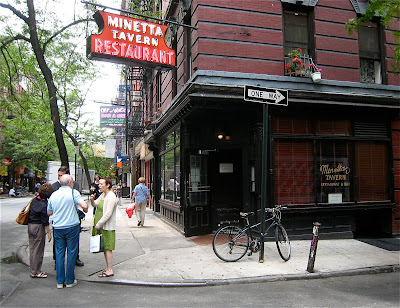 A burly, almost scary looking man opened the doors, pulled aside a set of tall, black curtains, and escorted me in. I felt like I was entering a different world. It took a second to adjust to the change in lighting but as soon as I contained myself, I was in awe. The furniture was all dark wood and the floors were tiled black and white. The walls were filled with caricatures of famous customers of the past and the ceiling was plated in tin. The decor was unmistakably tavernish. It could best be described as "Parisian steakhouse meets classic New York City tavern."


I was alone so I chose to sit at the bar, because that's what single diners usually do. The bartender promptly placed the menu in front of me and offered me a drink. I didn't really read the menu but later discovered that there were other gems on it as well, such as the Côte de Boeuf and the bone-in New York Strip Steak. This visit, however, was about the burger. And I ordered it medium rare along with a pint of Stout to wash it down.

It arrived at the bar counter shortly after, and the moment of truth was upon me. The presentation was quite simple. A shiny sesame sprinkled bun, a thick, oozing, beef patty, a generous helping of deeply caramelized onions, a side of  pickle, lettuce, and tomato, and a big mound of crispy fries. I held the rather large burger with both hands and drew it close to take my first bite.


It smelled much like heaven, if heaven smelled like creamy Gorgonzola cheese melted onto a sizzling chunk of rib eye steak. I closed my eyes and delved my teeth into it. Oh my God, this was it! There was instantly an explosion of flavors and textures in my mouth and it gave me a foodgasm.


That hamburger tasted so good that for the first time in my life while eating a burger, I refused to put ketchup or mustard on it. It didn't need any of those extra flairs. In fact, ketchup or mustard would probably have just ruined the raw deliciousness of that masterpiece.


The meat was succulent with the juices just dripping out into my mouth. The unmistakable funk from the dry aging was definitely what elevated this burger to its pedestal. The caramelized onions helped too. Even the bun was light but crispy on one side and in perfect proportion to the meat to balance out its richness.


I was such a happy little boy. The only remorse I felt that evening was that I hadn't discovered this place earlier.


I don't know if I can confidently say that I found New York City's 'best burger' that evening. I don't even know if there is such a thing. What I do know, though, is that it was the best hamburger I'd ever had. At $26, it also happened to be the most expensive one, but it was worth every penny.


I crave for that burger to this day.