All You Have to Lose is Your Waistline

If I had a rupee for every time I ordered hot chocolate at a café or restaurant and was served an awful cup of cocoa that was milky, flavorless and made with Cadbury's cocoa powder, I would probably have enough money to buy out Lindt or Valrhona by now.

Over the years, I have never understood why nobody makes good hot chocolate in India. One of my theories used to be that all hot chocolate serving establishments mirror the ideology that what people find most comforting is what we grew up with. I still distinctly remember the taste of steaming hot 'drinking chocolate' (courtesy Cadbury's) that's comforted me on many a rainy monsoon afternoon. And I'm thankful for that.

But what a conglomerate such as Cadbury's has also done in the process is to take what is probably the most soul satisfying liquid served in a cup and reduce it to a generic, unsophisticated, cloyingly sweet beverage that tastes almost nothing like real chocolate.

My other more plausible theory is that as a country, our exposure to chocolate has been limited to inferior quality chocolate bars and tins of so-called cocoa. Seriously, how tough was it to even find mediocre cooking chocolate back in the day!

Do not fret though. There is hope. Exceptional quality chocolate is now increasingly finding its way into gourmet supermarkets in most urban cities in India. And with great chocolate comes the great responsibility of making and serving genuine hot chocolate.

In protest against all the poor excuses for hot chocolate I have come across, I have made it a point to introduce the real stuff at my restaurant, albeit a mediterranean fine dining restaurant that normally wouldn't feature hot chocolate in the first place.

And like most wonderful things that induce pleasure of the gastronomic kind, a fine cup of hot chocolate is actually quite simple to prepare. But without shortcuts and sans ready-to-mix cocoa powder. Just straight up hot chocolate that screams, "try me and you'll know what I'm supposed to taste like!"

Remember that the better the quality of chocolate you use, the better will be the hot chocolate you end up with. In my recipe, I have added cinnamon and chili which lends a fantastic dimension to the drink. What flavors you want to add are entirely up to you. So go all out and experiment-- all you have to lose is your waistline. 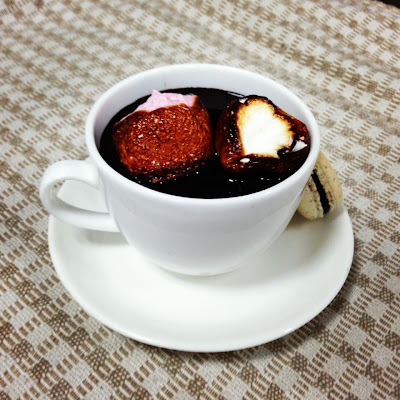 In a sauce pot, heat together the milk, heavy cream, cinnamon, chili and salt, bring to a boil and reduce to a simmer.

Set up a pot of water to boil and place the chocolate in a bowl that fits snugly on it without touching the water. Allow it to melt stirring constantly.

You're left with heaven in a cup-- luscious chocolatey goodness that is sure to hit the right spot. Serve it steaming hot with marshmallows if available.
Posted by ChefTZac at 2:32 PM