Birth of a Dish

As a professional chef, I don many hats during the daily course of my work. The speed at which I have to switch from being a grievance counselor to a grocery shopper or a guest relations personnel to accountant is akin to that of a chameleon. As creepy as that sounds, its true.

However, the role that most distinguishes me as a chef is that of a creator. To me, the true measure of a chef is his level of creativity. A chef who doesn't conceive new dishes is arguably not a chef in the truest sense of the word. It wasn't until I was assigned to my current role at the restaurant two years ago that I got the opportunity to do this. So I consider myself a tadpole in this regard. 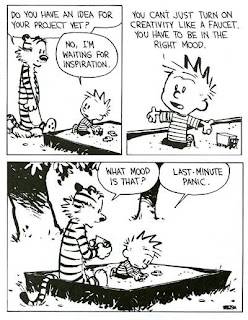 It is however far fetched to think that even the best chefs develop completely new recipes. Most dishes are merely combinations of ingredients to which different techniques are applied--a plethora of permutations that are delicious and appeal to diners.

Creating a new recipe is like writing a song or a poem. I can consciously try to produce something new but my best work comes spontaneously. It usually sparks as an idea which I immediately try to harness while my creative juices are still flowing. 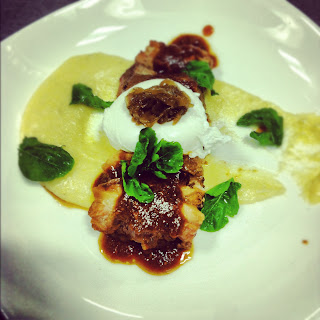 My inspiration for this pork belly dish comes from a meal I seldom have a chance to eat but dearly love--breakfast. It is a play on eggs, bacon and grits. The belly is braised in red wine flavored with chorizo for about three to four hours. It is then cooled, sliced and seared till crisp on the outside. Goat cheese polenta replaces the grits component of the 'breakfast' and the poached egg sits nestled on top waiting to be slit open to ooze its yolky goodness on to the plate.

The dish however wasn't yet complete in my mind. I couldn't stop there. I had to add the arugula to give the palate a break from all the richness and the caramelized onions add the necessary sweetness that balances out the rest of the flavors in the dish.

What started out as an idea is now one of the biggest selling entrees at the restaurant; and is my baby.
Posted by ChefTZac at 2:41 PM