Since I'd traveled all the way down to Naples, I decided to exploit one of the many day trip options from the city. I was spoilt for choice and had to turn down Pompeii, Herculaneum, Sorrento, Amalfi and Mount Vesuvius.

As great as my journey had been so far, it had been a lot to take in. I'd been away from home for nearly a month and a half and I needed a vacation from my vacation. Capri was just the perfect place.

Located just forty minutes away, Capri was a distillation of beauty unlike anything I've ever experienced. There aren't many such places where mountain and sea harmoniously merge to constitute one exquisite island.

Forgetting the stereotypes about Naples--that it's unkempt, shady and crude-- was important. In reality, it was. However, once I was able to look beyond all that, muffle the noise and breathe in the local culture, I found it to be endearing, charming and almost addictive.

Perhaps no other city in all of mainland Italy is as peculiar as Naples. Several corners of the city are adorned with baroque and gothic architectural marvels, but the real charm lies in the narrow cobbled-stoned streets in the centre. The small, closely-set apartments colored in different shades of yellow, green and burgundy house the majority of Neapolitans.

It is here where grandmothers gossip amongst each other while teenagers zip by in scooters; where miniscule balconies double up as laundry lines and gardens, and homes literally open on to the street giving passersby a front row seat into life in a Napolitan household. This raw vigour is synonymous with Naples and Naples only. It resonates throughout the city; in its shops and restaurants, markets and piazzas 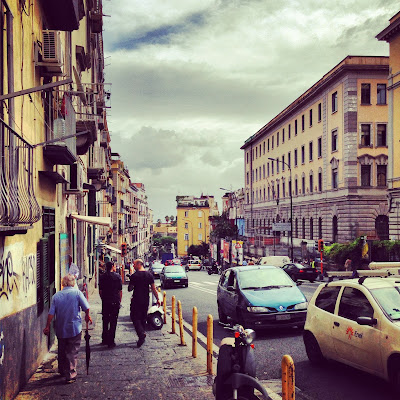 Though I've lived in over half a dozen cities including Mumbai and New York, I have always been baffled by this question. What makes a city truly great? Is it the fact that it facilitates a melting pot of cultures and people? Is it the luxury of convenience it lends? An efficient network of transportation perhaps? Or maybe the bounty of quality food and entertainment has something to do with it?

I finally found some answers in Rome, the first destination on my three month itinerary across Italy, France and Spain.

Some people consider Dublin to be a dirty kip of a place with drunkards and drug addicts, petty crime, a struggling economy and miserable weather year round. I must admit that I wasn't jumping at the prospect of visiting the city let alone spend nearly a week there. After all, Dubh Linn literally translates to 'black pool'!

Nevertheless, when my high school friend who is settled there insisted I visit and promised to change my mind about the city, I obliged.

Looking beyond the negatives that form Ireland's poor reputation however was not easy. I had to turn a blind eye to the class antagonism prevalent in the city and forget labels like skangers, tinkers and knackers; erase the sight of pregnant teenagers smoking right outside Rotunda Hospital; even hold my belongings close when I crossed over to the 'North side'. Dublin is also a very expensive city and public transportation is nothing short of a joke.


Whether the strong drinking culture emanates from a history of extreme poverty, shame (yes, look it up!), starvation or bad weather is irrelevant. On the night I cooked an elaborate, three-course meal for my hosts and their friends, there was enough alcohol consumed to get a small village drunk. The ease and speed with which these Dubliners switched from cocktails to wine to whiskeys and liqueurs was overwhelming even for someone who was brought up in the most 'drunken' state in India!

Between pub crawling through Temple Bar and tasting Irish whiskey at the Old Jameson Distillery, I managed to briefly step outside the city. Trips to Glendalough in the Dublin Mountains as well as the fishing town of Howth, both just an hour away, left me awestruck. Very few cities can boast of having not only a glorious seaside but also breathtakingly beautiful mountains both within arm's length.

Traditional Irish food, like British, predominantly focuses on wintery dishes like stews and braises. Meats especially pork and lamb and potatoes usually find its way into every household meal. Seafood is quite popular in the coastal areas.

Like most cuisines around the world, the past few decades have witnessed the emergence of a contemporary Irish cuisine based on traditional recipes being reinvented. The emphasis is on clear flavors, presentation and finesse. Restaurants like Chapter One, L'Ecrivain and Le Bon Crubeen in Dublin have made giant strides in this respect. Being an international city, it also has its fair share of ethnic cuisines like Chinese, Indian, Korean, Mexican, American, Italian and Middle-eastern.

Dublin is a quaint, beautiful city. With a host of museums, churches and historic houses to visit and pubs that come abuzz with live music every night, there is never a dull moment. Dubliners in general are some of the friendliest people in the world who will welcome you into their fold with a smile and a pint. Good food and drink are in abundance.

So in the end, I did change my mind about the place. Of course, the fact that four out of the five days I was there were wonderfully sunny and warm may have had something to do with it.

This one-pot classic is easy and inexpensive to make and perfect when the temperature drops a bit. It is already a wholesome meal on its own but you can serve it with rice or crusty bread as well.

Dry the lamb with paper towels and season generously with salt and pepper. Dust flour on the chunks and shake off the excess. Heat the oil in a large casserole or oven proof pot. When the oil is very hot, add the lamb to the pot making sure not to overcrowd it. Brown the lamb on all sides and remove it with a slotted spoon.

Add the bacon to the pot and allow to brown. Add the onion, leeks and garlic and sauté for a few minutes till it starts to brown. Add the browned lamb chunks, bay leaves and thyme sprigs and enough boiling stock just to cover the lamb. Season with salt and pepper.

Cover the pot and cook in the preheated oven for about half an hour. Remove the pot from the oven, give the stew a stir and add the carrots and potatoes.  Return the pot to the oven and cook for another hour till the lamb is tender. Taste and adjust the seasoning one last time and serve hot sprinkled with chopped parsley.

Alternatively, you can also cook this stew on the stovetop but make sure you keep it at a simmer as boiling it will toughen and dry out the meat.