Even in my wildest imagination, I would never have expected to be cycling through a European city at night clad in my chef whites. But there I was, peddling briskly and keeping a constant ten yards behind rainbow girl who was leading the way. When we got to our destination, we were greeted by cowgirl and Captain America who then proceeded to introduce us to Caesar, Attila the Hun and Catwoman among many others.


My culinary conquest had eventually taken me to Alsace in the north-eastern corner of France. Strasbourg its capital city located just three kilometers from the German border is representative of everything splendid about the two nations. The cuisine unmistakably steers towards Germanic culinary traditions than French. This makes it very distinctive from the rest of the food in the country-- my raison d'être for visiting the city.

Champagne: Magic in a Bottle

Barring its price, I love everything about champagne. The delicate taste, the perfect balance of sugar and acid, the golden hue, the fineness of the bubbles and its ability to pair with any food imaginable.There's no doubt it's a magical thing.

Fully aware of the care and effort that goes into making a bottle, I included as part of my elaborate itinerary in France a detour to Reims, home of the finest producers of champagne in the world. 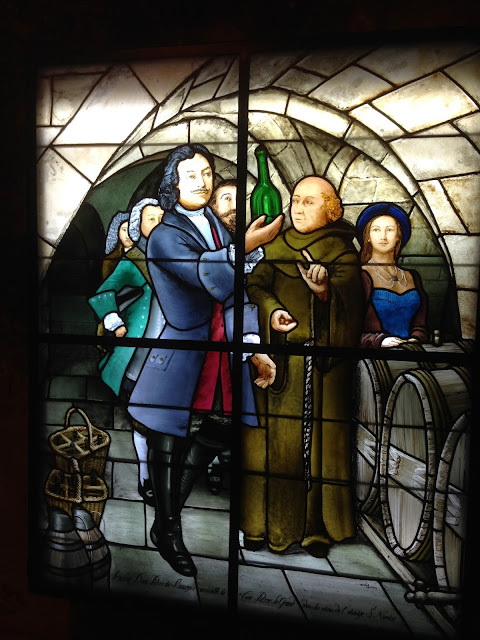 By law, champagne can only be made from three grape varietals - pinot noir, pinot meunière and chardonnay. Though the first two are red grapes, most champagnes have a golden-green hue because only the colorless juice from the flesh is pressed. After an initial fermentation and bottling, the wine undergoes a second fermentation within the bottle. Careful aging for a minimum of 18 months at controlled temperatures and humidity levels and the interaction between the wine and the yeast produces both the delicate flavors and the bubbles which are characteristic of champagne.

Boom! It was the night of 6th June 1944. Nearly a quarter of a million troops had landed on the shores of Normandy in a secret operation of retaliation against the German occupation of France. The number of casualities were so high and the losses to both sides so catastrophic that the incident was henceforth referred to as D-Day.

Standing on one of the D-Day beaches near Caen, it wasn't hard to picture what went down on that fateful night. Though I haven't in any way been directly affected by the incident, it was hard not to feel for the thousands who lost their lives.

But this was a happier time and there were lots of things to be thankful for. For one, it was scallop season in Normandy, the leading region for the bivalve mollusks in France.

I love scallops almost as much as I love bacon. For those who know me personally, you know how much I love bacon and what that statement implies-- I sleep with a few rashers under my pillow every night.

Saint-Malo, Brittany: Fortress on the Sea


Having conquered Paris, I set out to explore the rest of France. Like in Italy, the plan was to visit at least one town or city in each region known for having its own unique style of cuisine. While my route in Italy was mostly linear and easy to navigate, France was a bit more of a challenge owing to its hexagonal anatomy.

I decided to begin in Brittany in the north western tip of the country and then work my way clock-wise through Normandy, Champagne, Alsace, Burgundy, Rhone-Alps, Provence, Acquitaine and the French Basque country, collectively clocking a distance of nearly 3000 kilometers in three weeks.

Of the several options I had in Brittany, I picked Saint-Malo mainly because of my affinity for the sea. Saint-Malo was unlike other fishing ports I had previously visited on this trip. In fact, it was unlike anything I’d ever seen before.

Jutting out ever so slightly into the sea, this walled fortress city with its medieval charm was remarkably easy to fall in love with. There was an unmistakable smell of fresh oysters permeating the air and the beaches surrounding the city were so flat that I could tread several hundred meters inwards during low tide.

France, the country that gave the world champagne and camembert, cinema and haute couture. It's a nation that boasts of exquisite art, remarkable architecture and the most influential cuisine on the planet.

I had spent the better part of six years of my culinary education studying its food and wine, albeit from the outside. This was my opportunity to taste the revered cuisine and all its regional variations at the source, and visit the temples of gastronomy that I 'd been trained to worship.

My first stop was Paris, capital of all things elegant and chic, suave and sophisticated. Just a mention of the name evokes images of grandeur and finesse.

With a social system that guarantees free healthcare and education and provides benefits during unemployment and retirement, the quality of life in France is perhaps better than any other country on earth. Paris with its beautiful public spaces, excellent transportation facilities and easy accessibility offers a whole lot more.


Food and wine were still my number one priority but I had a specific mission here. I wanted to experience what it meant to be a Parisian. I was determined to get to the crux of daily life in this city and to not just witness the French art de vivre but also practice it.