A Tribute to My Floyd 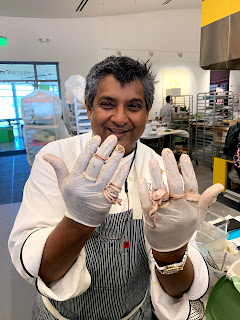 With memories and anecdotes pouring in from across the world over the last few days, it is hard to ignore the countless lives that Chef Floyd must’ve touched deeply in his time. Whether you were his childhood buddy growing up in the bylanes of Bandra, a fellow classmate in Dadar Catering College, a line cook in the banquet kitchen at Taj Mahal Palace, perhaps even a teacher at Les Roches in Switzerland where he studied hospitality management, or one of the many cooks honed in his kitchens at Lespinasse, Tabla, North End Grill, White Street or Paowalla, the chances are that he left a lasting impression on you. For a man whose life took him across various continents and with a career that spans close to four decades, I doubt I could do justice writing about his life before I knew him. So I’ll keep this one personal. This is my Floyd story.

Although I did spend three years in New York from 2007 to 2010, studying at the Culinary Institute of America first and then working at Le Bernardin, I never met Chef Floyd who’d already been a long time resident of the city. Incidentally, my stint at Le Bernardin was in the same year that his magnum opus Tabla shut its doors. I had never eaten there and upon hearing the news of its closing, I decided to grab my last chance to try the place. I remember sliding onto a stool at the casual Bread Bar on the ground level of the restaurant on a pleasant fall evening in late 2010. I couldn’t quite afford the upstairs dining room on a line cook’s salary in NYC and the Bread Bar was known to be more approachable and fun.

To be completely honest, as a young, naïve 24 year-old cook sitting there sifting through his menu, I didn’t quite understand the food at Tabla. Chef Floyd’s menu of Indian-inspired American fare, or was it the other way around, seemed alien to me. I was raw, unseasoned and brainwashed like most other aspiring Indian chefs into thinking that classic and modern Western cooking was the Holy Grail. Indian food wasn’t worth indulging your career in, chimed peers and professors alike. I failed to recognize - let alone appreciate - the new language he had created for Indian food in mainstream restaurants. His philosophy involved adapting and evolving the cuisine without taking away the integrity and soul of the source inspiration, not very different from the way food cooked in home kitchens across India had evolved over decades. My ignorance aside, it was indeed a mindblowing meal although I didn’t end up meeting him that night.

Fast-forward four years to early 2014. I had just returned from a four-month long sabbatical eating my way through Europe to my sous chef job in a modern European restaurant in Mumbai. A trip that was meant for inspiration changed the course of my life thanks to a moment of epiphany I had while dining at the world renowned Osteria Francescana. Suddenly, in a moment of clarity, I knew I needed to shift my career focus towards Indian. Meanwhile, almost serendipitously, there were three gentlemen who were conspiring to open a modern Indian restaurant in Mumbai and needed an executive chef to helm the kitchen.

The city was already abuzz of this upcoming restaurant opening. “A touted Indian chef from New York (we’re not at liberty to reveal his identity) in partnership with restaurateurs Sameer Seth and Yash Bhanage (they’ve set up places in Delhi and Singapore) is looking to open Tiffin Club here by August,” one article reported. The original inspiration for The Bombay Canteen came from the clubs and gymkhanas of a bygone era of Bombay, hence the first name idea of Tiffin Club.

I had already put in a three-month resignation notice at my job when they approached me through a headhunter. Five minutes into my first conversation with Sameer, I was sold on his pitch. When I found out that the touted chef was Floyd Cardoz, I was a little intimidated. I had heard of Chef Floyd’s reputation as being a tough, hard-to-impress industry stalwart and with my limited experience cooking Indian food professionally, I wasn’t sure I even had a chance at bagging this role. But I so badly wanted it. I knew this would be my big break.

I remember the first Skype interview I had with Chef Floyd in April 2014. Something about his demeanour made me feel instantly at ease. I wondered if the years had softened his rough edges or if people had just falsely assumed that he was tough. Our conversation was mostly casual with no technical questions whatsoever. I remember being surprised to see the childlike sparkle in his eyes as he spoke about the potential of celebrating underrepresented regional Indian food through this restaurant we were about to open. 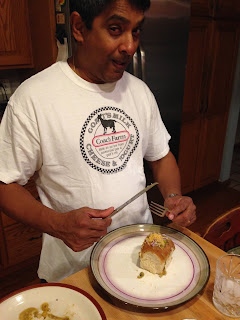 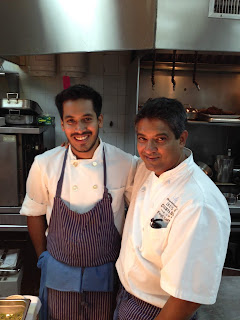 Over the next several months, the four of us business partners - Floyd, Sameer, Yash and I - spent a lot of time together, traveling, eating, recipe-testing and bouncing ideas off each other for what was to materialize into The Bombay Canteen. I even made a trip to New York to spend some quality time with Floyd. While half of this visit was dedicated to his kitchen at White Street to understand his operating style, it was the remaining time as his house guest that got us close. Not just did we test recipes in his home kitchen, but I also helped clean, walk his dog Shadow, and went out on grocery runs together. With this new role as Executive Chef of The Bombay Canteen, I was pretty much thrown in the deep end but Floyd was there as a guiding figure every step of the way to help me swim. 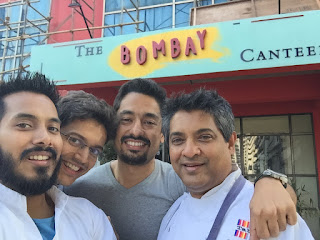 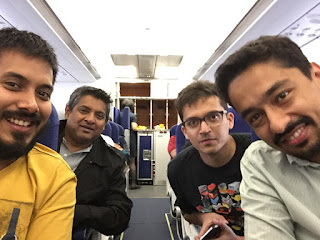 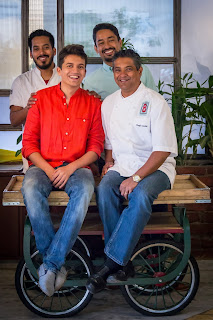 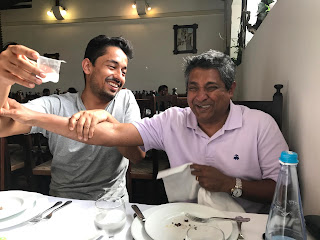 In the years that followed, I got to know and understand this celebrated chef better, but also quite differently from how the rest of the world perceived him. Whether during our weekly update calls or on one of his quarterly trips to Mumbai, the four of us partners became a close-knit family. The way we conducted ourselves around each other was more like high school besties rather than business partners or colleagues. In spite of the age difference--the three of us in our early thirties and Floyd in his late fifties-- it just felt so right. In fact, if anything, Floyd was always the mischievous teenager in the group cracking jokes to lighten the mood or bursting with his contagious energy.

Chef Floyd was an emotionally expressive man who always wore his feelings on his sleeve. He could be really stubborn about things he believed in, but opinions around the table were always heard. He saw the bigger picture but also cherished the finer details. Despite living in a different continent, Floyd loved to be continuously cued in to what was happening at Hunger Inc in Bombay. In fact, he insisted on wanting to be a part of not just the bigger decisions but also knowing the most trivial daily occurences at the company. He was more proud of what we had achieved through The Bombay Canteen, O Pedro and Bombay Sweet Shop than the remaining three of us combined, and always pointed out how we don’t take enough credit for our laurels.

Floyd and I have traveled together on food trips far and wide. From Goa to Portugal or Kolkata to Cochin, culinary adventure was our common addiction. In November last year, I had the honor of cooking alongside him at the prestigious James Beard House in New York, an opportunity of a lifetime really. Soon after, we spent a whole week together presenting at the CIA Worlds of Flavor conference in Napa spreading that same message of celebrating traditional Indian food. I was in awe of this man who showed no signs of fatigue talking up Indian food for nearly 25 years, and still continuing to sing praise of our country’s rich cuisines with the same vigor of someone who’d just discovered its potential. 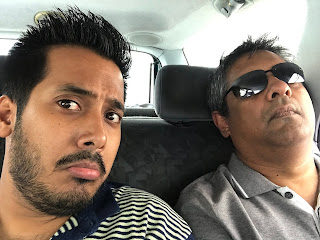 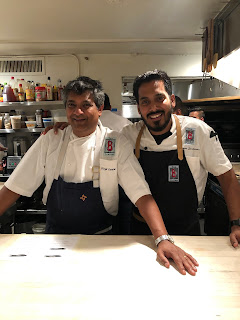 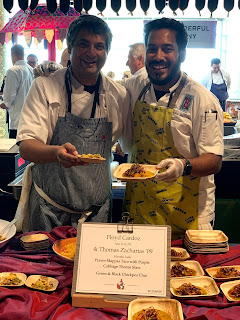 It’s not often that you get to cook alongside a legend, and with our relationship maturing into a unique blend of friendship interspersed with mentorship, it was all the more memorable. That same week found us eating in some fantastic restaurants, downing wines at local vineyards, and just going on long beautiful drives in the countryside. I remember making a mental note that despite all the ups and downs in his life, Chef Floyd seemed so truly happy and content. What really took me by surprise on this West coast sojourn however were the reactions he got wherever we went. I was aware that he was a well known figure but the respect, adulation and love he got wherever we went from local bakeries to high end restaurants was nothing short of revelatory. I couldn’t help but smile at what a legacy he had already left behind.

Floyd was deeply fond of teaching and mentorship, so it’s only fair that I use this opportunity to talk about some of the lessons that I took away from him.  Don’t be a No person. There will be multiple challenges and opportunities that are constantly thrown at you in life, and instead of turning them down immediately, analyze and introspect before making decisions. Keep your childlike wonder because there’s a lot more joy you can derive from the world than you would imagine.Stand up for what you believe in and be true to yourself. He was a total no-bullshit kinda guy. Believe in the team.“Building a stronger team will make you stronger as a chef,” he’d once said. Moral values have their place everywhere, even in the kitchen. You can nurture people into cooking good food without being an asshole to them. Be the bigger person, when people or situations turn against you. Floyd was a vocal proponent of balance in food through textures and flavors, but he also demonstrated that in his personal life, leading by example and being as much a family man as he was a chef.

On the night of his passing, after a few hours of delirious crying and screaming in the lone confines of my apartment, I walked into my kitchen, pulled out a stash of Goan choriz I’d been saving and just cooked freestyle. That was my way of coping, I guess. All our times together flashed before me as I smelt the smokey goodness from the sausage filling up the room. I added some dried beans, onions, garlic, and bay leaves and it turned into a sort of delicious Southern American chili but with Goan choriz instead of meat mince. Topped with a couple of fried eggs and some braised poi saag I’d made earlier, this was my attempt at a tribute meal. Floyd would’ve loved this, I thought.

It still hasn't fully sunken in for me that he’s no more. Being someone who’s terrible at grieving, I hark back to all the tough times Floyd has gone through in his own life. Just thinking of his resilience in times of adversity gives me some strength to at least begin to cope with this deep loss. A couple of days ago, a close friend pointed out that Chef Floyd and I shared a faint physical resemblance, like he could easily be someone from my family. It’s hard to argue that in so many ways, because he truly was.